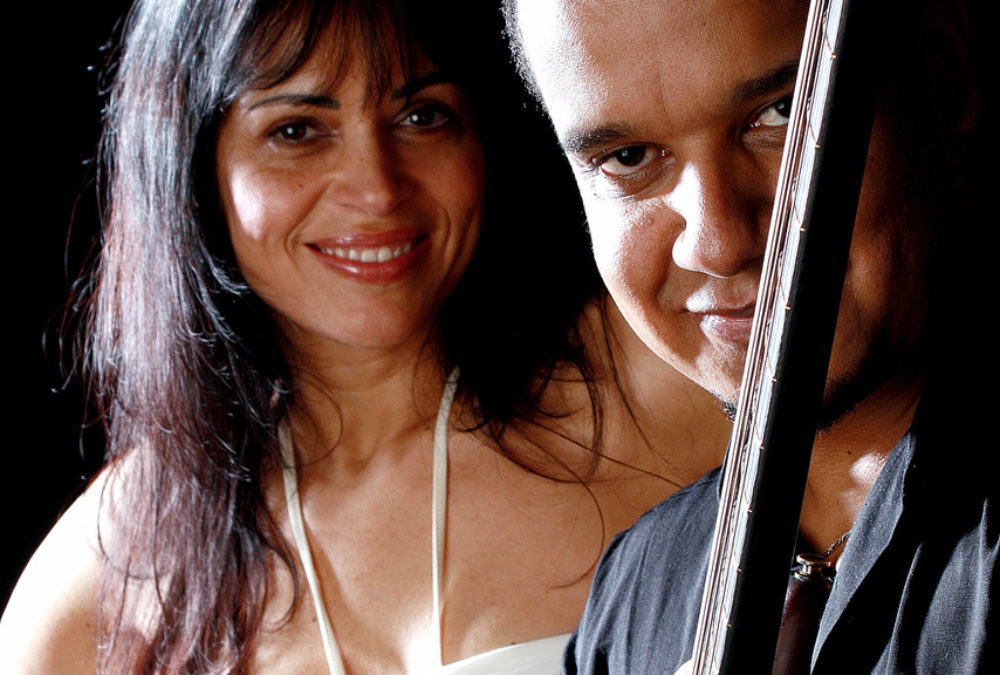 The daring combination of voice and bass has rarely been undertaken in Brazilian music. Although there are so many excellent singers and also a host of highly skilled bass players, this unusual teaming up is rarely to be found. Viviane de Farias and Mauro Martins have not only accepted the challenge – they have come up with an innovative duo performance. “Balakumbala” is a vivid, tongue-in-cheek play on words so significant in Brazilian culture. The word comes from a well-known song by João Bosco and Aldir Blanc, where the speaker tells of visiting the cinema and enjoying himself while the heroes on the screen get into a duel. They
start to fight bullet for bullet (bala com bala), then knife for knife, fist for fist and then eventually they measure their strength with words. The duel becomes a duo – just as it is with Viviane and Mauro who, in their conversations on this album, present a surprising plethora of musical options, well rooted in their biographies. Singer Viviane de Farias has roots in the Indio culture of the Northern state of Ceará but also in Rio’s famous barrio Ipanema. She grew up in Brazil and Los Angeles, developed her acting and singing talents in Rio and Chicago, and dedicated herself to chanson, jazz and – at an early phase of her career – particularly to opera.
But soon her Brazilian roots gained more importance in her artistic life as she immersed herself in samba, chôro and bossa nova and the huge repertoire of the Música Popular, with renowned composers such as Ivan Lins, Chico Buarque, Tom Jobim and Guinga. On her last In & Out album “Moment Of Passion” (IOR CD 77088-2) she already proved that she can put together a programme of bossa, jazz and songwriting in a most flexible, delicate and energy-driven way. Brazil’s most important newspaper, O Globo, heralded her as “one of the big hopes for innovation” in the country’s music. Bassist and drummer Mauro Martins comes from the
southern city of Curitiba and took up guitar and percussion at the early age of six. A European resident for many years, like Viviane, he has participated in many different musical worlds. He is a highly sought-after session man, arranger and composer, and he has collaborated with first class pop and jazz musicians, such as Phil Collins, Tania Maria, Richard Galliano und Chico César. From Montreux to New York’s Blue Note and Birdland, he has played at festivals and clubs all over the world. His speciality is a funk- and jazz-driven playing on the six-string  electric bass, uniting incredible virtuosity with an intriguing melodic quality. Viviane and
Mauro have now united their multi-faceted acoustic experiences, gathered together the whole universe of Brazilian cultures and beyond – and eventually evolved a combination of new sounds to create an intimate and very personal language. Listen to the sheer volcanic power of
the title track, an explosive jazzified frevo and bossa nova evergreen turned into a funky samba with bluesy interludes. Let yourself be taken away by the power of slaps and scats in astonishing unison, by Viviane’s rich panoply of timbres, sometimes gentle and melancholic, then coy and sultry or swift and volatile, by Mauro’s sensitive growling, his soulful melodic inventiveness and his rapid clusters of notes. Witness how the duo turns classics of the Música Popular by Chico Buarque and Clara Nunes into moving jewels, talking of Brazil’s history and true love’s future. Note how they revisit treasures of north-eastern folklore and forge them into a new, shining piece of contemporary art. And last but not least, discover rarities and new compositions especially created for this programme. All clichés aside, this is a revelation of the true “alma brasileira” – the soul of Brazil. “Balakumbala“ is a breathtaking tête-à-tête, which adds to contemporary Brazilian  music a thoroughly new and captivating perspective, stripped down to the extraordinary talent and ingenuity of two people. 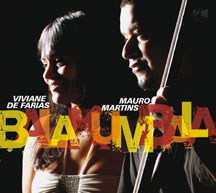