Cuban pianist Ramón Valle is a seasoned veteran with the explosive energy of a racehorse straight out of the gate.
Ramón’s stage presence is commanding, whetever within the ranks of an orchestra or leading a trio. His performances and stage presence are charismatic, his music – intoxicating. 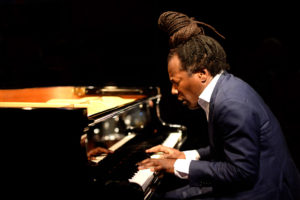 Valle was only seven when he began studying the piano at the Escuela Nacional de Arte in his hometown Holguin, Cuba. He later completed his advanced studies at the Escuela Nacional de Arte in Havana. After establishing himself on the jazz festival scene in Mexico, Bogota and Havana, the great Cuban pianist and founder of Irakere, Chucho Valdes, declared Ramón Valle ‘The greatest talents among our young pianists’, when introducing Ramón on his debut album, Levitando in 1993.

Valle’s original composition, Levitando, has since become a well known Cuban anthem around the world.

Ramón Valle is an official Steinway Artist. He recorded 13 albums, of which 3 albums with the German record label ACT and he is now signed to In+Out Records, a German-based independent label with distribution throughout Europe, The USA and other international countries.

In September 2018 Ramón Valle won the Cubadisco Award, Cuba’s most prestigious music award, for his album ‘’The Art Of Two’’ in the category ‘’Best Instrumental Album 2018’’.

In May 2019 Ramón Valle received the honorary award for his excellent work as an artist, composer and teacher. For his outstanding achievements as a composer with a repertoire that syntehsizes the tendencies of contemporary jazz he is considered one of the best Cuban jazz pianists around the world.

“Valle is a more open, overly emotional piano – trio master than Brad Meldhau. Mcoy Tyner and Chick Corea are the musicians who come to mind as comparisons. He is a formidably sophisticated player rooted in Cuban jazz, but drawing on resources way beyond the usual suspects the idiom usually calls up. “★★★★ – THE GUARDIAN, LONDON

“Valle is equally adept at intensely swinging like Oscar Peterson – but with a groove that reflects the syncopation of the Afro-Cuban clave-playing pop music or reveling in the island’s many traditional rhythms. And like any of the pianists who record for ECM, Valle can draw the curtain down around himself and play powerfully introspective music.” – JAZZTIMES